Field Update
After almost two of three weeks of the final Lott House field school, things are progressing as we expected, for the most part. We were very fortunate that we have a larger field crew than expected this year. We thought there would be approximately 16 students but instead 20 took the program. This meant that we had to increase the number of trenches from four to five (there is a four-person crew per trench). As expected, we have not recovered a large amount of material remains. Remember, the goals set forth in our research design for this field season were not the recovery of material remains, but rather the uncovering of the site's stratigraphy, other features such as road beds, planting fields, and perhaps the elusive tennis court and well.

What we learned from these two trenches was a bit more about the stratigraphy of the area. Only two levels appear to be in this area; a thick layer of top soil/humus followed by the natural sterile red-orange clayish subsoil. This sterile soil appeared in both trenches approximately one-half centimeter below ground.

Why there are only two layers, including the sterile soil, so close to the surface, we cannot explain just yet. Perhaps when the street was laid in 1927-1928, the City of New York did a large amount of earth moving and this changed the landscape along the property line? At this time we have ended work in the southeastern area of the property.

North-West Field Work
Three trenches were placed in the western and northern field. These were excavated in the hopes of uncovering more trash deposit areas. 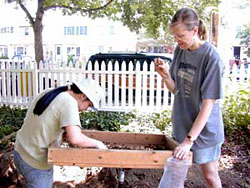 Like the trenches in the southeastern field, little information with regard to our research plan was recovered from two out of three of these trenches. The two trenches in the western field were fairly sterile. Only two layers (the top soil and the sterile subsoil) were recovered.

Once again, it appears that the ground was transformed by New York City when East 37th Street was created in 1927-1928. The final trench in the north field produced a thin shell layer much like the shell layers uncovered in the general area in 1999.

However, unlike the previous years, little in terms of material remains were recovered from this trench. With the first five trenches finished and backfilled, we have begun to move to the last round of trenches for the Lott House Archaeological Project. We'll be working in the basement, within the garage, and in three other areas of the property in the hopes of gaining answers to our research questions.

Now turn to our field crew's thoughts on the first few days of the dig.