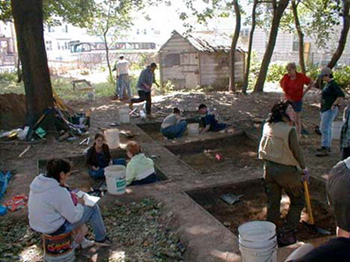 The ground is grainy and compacted, not the easiest to dig in the Lotts' big backyard where we'll dig this summer. The dry New York conditions and strong winds have created a sifting nightmare as the loose dry dirt is blows around. It's very messy on site right now. Maura calls it the Dust Bowl. Hopefully this will change with a good rainstorm. First order of business: breaking the students into five excavation teams of four people each. After showing them around the property and re-laying the North/South base line so we'd be able to record trench locations accurately, we were ready to start.

We wanted to keep everybody in shouting range until the first-time excavators among us felt comfortable. We also wanted to investigate the area around three test pits we'd dug last season. Lots of shell was turning up there and we might find the Lott family midden (trash pit) in that area. So we clustered our first trenches (2m x 2m square) around the test pits. Sure enough, trench N22.5 W2.5 (click here for an explanation of the numbering system) has yielded a thick deposit of clam, oyster, and conch shells about 5 meters from the western side of the house, appearing to span 4.5 meters in length (south to north), and 2 meters in width. Beneath that layer, we found an 1817 coin. From this, we know the shells were deposited after 1817.

Why so much shellfish in an area known for its agriculture and its abundance of wild animals? Click here for more on animal remains at the Lott House.

Other remains have turned up among the shell, further indicating that this was a refuse pit: sherds of green rococo-edged pearlware, flow blue, and American made slipwares (click here for a refresher course in Lott House pottery), several pipestems, bowls, animal bones, and a Native American point.

To trace the boundaries of the shell we would ideally excavate another trench. Alas, the spot we need is directly below our big pile of backfill. So we've decided to test the boundaries of the potential midden with core samples. Using a long, narrow coring tool, we will extract intact cylinders of soil. Where the corer won't cut through the dense shell, we'll use an auger which has an end that looks like a screw. The auger collects a vertical soil sample as well. Either way, we'll have a look at the different strata we'd encounter if we dug. More on that next week as results come in.

With the help of a grid students map a feature.
Click here to see why archaeologists use a grid.
(Courtesy Brooklyn College)

Excitement was high when a trench behind the house revealed an ornamental brick pathway leading to a basement entrance. When was the feature installed? Where did it lead? We excavated approximately a meter more, hitting sterile soil at about 50 centimeters. Then, in an adjacent trench to the northwest of the first, we found more bricks. We thought at first they belonged to the path, but noticed these bricks were more worn. We dug further until we noticed that this second path was at lower level and seemed to point in a slightly different direction. These were two different paths from two different periods! Beneath the second path, evidence of still an earlier shell path is beginning to appear. Later, back in the lab, a brick typology will allow an expert to help us date the brick paths based on their composition and the technology with which they were made. 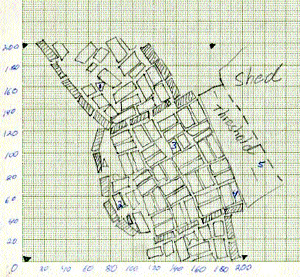 A map of the uppermost path
(Courtesy Brooklyn College)

Two Circular Depressions
We hope to find out if two circular depressions are privies or wells. The first depression appears to lie at the end of the uppermost path. The first depression has revealed nothing yet, but the feature's proximity to the path has made us hopeful. Could the path have led from the house to a privy represented by this depression? Or does the depression represent a hole later dug overtop a former path? Perhaps the depression is a natural feature unrelated to the path; the paths could have led to the barn, no longer standing, whose precise location remains to be uncovered.

The second circular depression is across the site from this one. We'd hoped it was a well, but have not yet found many historical artifacts. Instead, we have found concrete and plastic nestled in organic-rich soil. We haven't lost hope yet: the well could be further down. The Lotts could have covered their well with concrete or dropped concrete down it in the modern period. As for the organic material, it probably represents dirt and leaves that fell in.

Builder's Trench
Also under excavation is a trench abutting the foundation of the house. To build a house, workers excavate a trench larger than the dimensions of the building so they have somewhere to stand while laying the foundation. When they backfill, cultural material likely enters the mix. We hope excavating here will turn up such material and help confirm the dates of the house's construction. We have a solid ten-year range of 1795-1805, but we'd like to narrow it down if we can.

Is this deposit of shell too thick to be a midden?

Was it put down instead to level out a dip in the property?

Was Flatlands as flat as we think it was?

We know there's a finished room in the basement, where the latest path begins. Where do you think the path leads?

Alyssa thinks the second depression is too disturbed to reveal much evidence of its primary use. Arthur disagrees. What do you think? Modern deposit or old well?

Usually, if you can date an archaeological feature within ten years, you're lucky. What finds would pinpoint the very year the house was built?