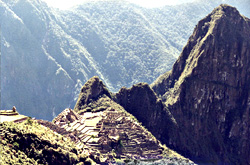 Machu Picchu viewed while descending from the Sun Gate

We wandered down a long stretch of Inca road from the Sun Gate, enjoying the view of the site below us and feeling good about having hiked the Inca Trail. To us, it seemed that slogging over the passes and heights had earned us more of a right to be there than the bus loads of tourists who were driven there from Cusco. We looked about for awhile, then continued down to our campsite in the valley below. We were all blown out and rather grotty, so a trip to the natural hot baths at Aguas Calientes was in order, followed by dinner at one of the local restaurants near the train tracks. Tomorrow, after spending most of the day at the site, we'd catch the train here for the ride back to Cusco.

How lost was Machu Picchu, the lost city of the Inca? Yale graduate Hiram Bingham (a student of Simón Bolívar's military campaigns and future U.S. Senator) was looking for Vilcabamba, the jungle city to which the Inca retreated after their rebellion against the Spanish failed. He had examined and dismissed as a candidate the ruins at Espiritu Pampa, 100 km west of Machu Picchu and now believed to be Vilcabamba. But in July 1911, Bingham was still looking when a local campesino led him to the ruins. Peter Frost, in Exploring Cusco, reports the existence of an early map, pre-dating Bingham by 30 years, on which Cerro Machu Picchu is marked, as well as a church document dating to 1798 recording that 900 people lived in the valley up to Huayna Picchu. Furthermore, archaeologist John Rowe found a reference in the Spanish archives to Picchu, an estate of the Inca ruler Pachacuti north of Cusco. Bingham's discoveries (Machu Picchu and the Inca Trail--I won't quibble over the word, he brought them to the attention of the world), those of the Viking Fund Expedition (Huiñay Huayna), and more recent ones (on Cerro San Miguel and Mandorpampa) prove that this entire region was settled and that Machu Picchu was never an isolated city. Was the whole region "lost"? Pisac is much larger and much closer to Cusco than Machu Picchu, yet it is not mentioned in the chronicles, so the lack of pages and pages of early descriptions of Machu Picchu really isn't that surprising.

Your ticket to the not-quite-lost city of the Inca

It does appear that no Spanish artifacts have been found in solid contexts at Machu Picchu either by Bingham or the recent Peruvian excavations directed by Julio Tello. Why was the region abandoned? If the sites here were built by Pachacuti and populated by members of his clan or ayllu, they may have gone into a decline in the generations after his death. The remaining population may have been further reduced in the protracted struggle between the Spanish and the remnants of the Inca at Vilcabamba (the late Inca rulers Tupac Amaru and his brother Titu Cusi are said to have pursued a scorched-earth policy in the area).

In the morning we hopped on a local bus up to Machu Picchu, entering the site early, before hordes of tourists like us clogged up the place. Unfortunately, our local guide embarked on a rambling discourse, much of which was his low opinion of Hiram Bingham. According to him, Bingham had found much gold when he excavated at Machu Picchu and had spirited it out of the country. It was difficult to listen to this nonsense and watch as the buses came, one after another, and tour groups of Americans, Germans, French, and Peruvians filled the site. (Yale University archaeologist Richard Burger later assured me that there is no secret vault containing gold looted from the site by Bingham.) The bus loads of average tourists weren't the only inhabitants of the site. A man in flowing white robes stood on a high terrace with arms outstretched to greet the morning sun, and near the "Sacred Rock" the earth-mother worshipers we had seen on the trail sang a hymn to an Inca goddess.

Machu Picchu was (and is) not a large site. Its population has been estimated at about 1,000. The main part of the site is essentially two ridges with terraces and buildings separated by flat area. There are lots of agricultural terraces at and near the site, so it is likely that it shipped food (and probably coca from the jungles farther downriver) back to Cusco or at least to sites like Sayacmarca on the Inca Trail. In addition to the 200 or so residential buildings, the site has a number of unique structures that appear to have had spiritual or ritual functions that are on the must see list for visitors:

Intihuatana--better preserved than the one at Pisac, it is equally enigmatic in terms of its purpose. The gnomon for a sun dial? An astronomical observation post? Does it replicate, in an abstract way, the shape of Huayna Picchu, the peak just beyond Machu Picchu proper?

Sacred Rock--most books will tell you this upright slab was cut to resemble the peak seen directly across the river valley, but Johan Reinhard, in Machu Picchu: The Sacred Center, may have it right in suggesting instead that it mirrors the shape of Pumasillo in the opposite direction.

Temple of the Condor--thought to be a prison by Bingham (an interpretation nobody believes today), it is named for what may be two-dimensional carved condor.

Intimachay--the window in the stone wall facing this small cave looks out to the December solstice sunrise.

Temple of the Sun--an inscribed line in the rock within this round, tapering tower points through a window to the rising sun on the June solstice.

Huayna Picchu--ready for a quick jog? Head up this granite peak! Don't forget to stop at the Temple of Moon part way up.