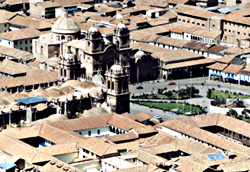 Overview of plaza with cathedral and Jesuit church

The Inca called their empire Tawantisuyo, which means the Land of the Four Quarters, the four quarters being Chinchaysuyo to the north, Condesuyo to the west, Collasuyo to the south, and Antisuyo to the east. At the center was Cusco. Although many of the chief Inca buildings no longer exist, save for odd stretches of wall here and there, the grid of the colonial and modern town basically follows the layout of the Inca capital. The empire's political and religious center, Cusco was conceived of as a puma, with Sacsayhuaman, the enormous temple-storehouse-citadel above the city, as its head and the city proper its body. The northeast end of today's main square, a truncated version of the main Inca plaza known as the Plaza de Armas, is the underbelly between the puma's front and back paws. (I wonder what sort of animal was used for planning Washington, D.C.!)

Cuczo's central sector included palaces, temples, and public buildings. According to early chroniclers it was redesigned and rebuilt by the ruler Pachacuti, who is also credited with the building or rebuilding of Sacsayhuaman, Pisac, Ollantaytambo, and Machu Picchu, as well as defeating the invading Chanca tribe and expanding the empire. Some 15,000 to 20,000 people lived in the central area and 125,000 within five km (three miles) of it.

Pachacuti, the Inca who made Cusco

The beer that made Cusco famous!

Cusco survived the initial Spanish occupation (Pizarro entered the city on November 8, 1533). But after enduring considerable abuse, the rightful Inca heir, Manco, rebelled. His forces bottled up the Spanish in Cusco, using Sacsayhuaman as their citadel. During the six-month-long siege, the Inca set fire to buildings occupied by the Spanish and rolled immense boulders down into the city from Sacsayhuaman. Eventually the Spanish cavalry broke out and counterattacked. After desperate days of fighting at Sacsayhuaman, the Inca were defeated. From then on the Spanish were free to quarry the Inca buildings for stone to build their own.

Surrounded by restaurants and tourist shops and the impressive cathedral and Jesuit church, the Plaza de Armas is the focal point of the town today as it was throughout the colonial period. The plaza witnessed the executions of Diego de Almagro, the defeated rival of Francisco Pizarro, in 1538; Gonzalo Pizarro in 1548; Tupac Amaru, last legitimate Inca ruler, in 1572; and, in 1781, José Gabriel Condorcanqui, better known as Tupac Amaru II, leader of a popular uprising against Spanish rule.

Some of the most curious monuments to the blending of Inca and Spanish culture are paintings that can be seen in the cathedral, on the plaza's northeast side, and in La Compañia, the Jesuit church, on the southeast side. Not to be missed in the cathedral is a seventeenth-century Last Supper by Cusco artist Marcos Zapata with a guinea pig standing in for the lamb. Guinea pig, or cui, was eaten by the Inca and can be found in restaurants in Cusco and even skinned and shrink-wrapped on foam meat trays in supermarkets. More poignant is a painting of the marriage of Martín de Loyola, a relative of St. Ignatius, founder of the Jesuit order, to Doña Beatriz Ñuestra, granddaughter of Manco Inca. It was Loyola who pursued and captured Tupac Amaru, a son of Manco and uncle of Doña Beatriz.

Calle Loreto extending southeast from the Plaza de Armas has long stretch of wall from the Acllahuasi, the House of the Chosen Women, or Virgins of the Sun. Royal concubines, these women wove vicuña and alpaca garments for the Inca ruler and brewed his chicha, beer made from corn. Some bore his children.

The heart of Cusco and of the empire was Coricancha, the Temple of the Sun. From here Pizarro's men took hundreds of pounds of gold, first as Atahuallpa's ransom, later as general plunder. The chronicler Cieza de Léon described part of what they found there: There was a garden in which the earth was lumps of fine gold, and it was cunningly planted with stalks of corn that were of gold--stalk, leaves, and ears.... Aside from this, there were more than 20 llamas of gold with their young, and the shepherds who guarded them, with their slings and staffs, all of this metal. There were many tubs of gold and silver and emeralds, and goblets, pots and every kind of vessel of fine gold.

The Coricancha also functioned as an observatory for solstices, equinoxes, and eclipses, important markers of time for both sacred rituals and planting of crops. It was also the spiritual navel of the empire from which emanated 42 sacred lines or ceques with 328 associated shrines or huacas (canals, fountains, royal houses, caves, boulders, springs). These ceques demarcated the four quarters of the empire (three were divided by nine each, while the fourth, Condesuyo, was divided by 15). Coricancha, through the ceques, drew religious power from throughout the empire.

The church of Santo Domingo was built over the ruins of Coricancha, obscuring them until an earthquake in 1950 exposed some of the Inca walls. But they are just that--bare walls that evoke little of the magnificent temple that existed here or its spiritual importance to the Inca.

The greatest and most splendid building erected to show the power and majesty of the Incas was the fortress of Cusco...those who have seen it...imagine, and even believe, that it was made by enchantment, the handiwork of demons rather than of men.--Garcilaso de la Vega

On the heights overlooking Cusco to the north are the remains of Sacsayhuaman, known throughout the world for the triple line of massive zigzag stone walls. (Putting the Late Bronze Age citadels of Mycenae and Tiryns in Greece to shame and making Stonehenge look like the work of a pack of amateurs). The name can be translated as speckled falcon or royal eagle, but may also be a corruption of the words sacsa and uma or speckled head, and be related to the conception that Cusco as laid out in shape of puma. It is a steep 30-minute walk to Sacsayhuaman from the city, but no great hardship and a good way to see part of the Cusco other than the Plaza de Armas. Plus you'll have to get used to such climbs if you plan on hiking the Inca Trail.

The chronicler Cieza de Léon referred to Sacsayhuaman as the Storehouse of the Sun, indicating a religious function though its role as a fortress is better known from Manco's rebellion when Inca forces occupied it and laid siege to the Spanish in the city below. Juan Pizarro and the cavalry broke out of Cusco, circled around and attacked the Inca in Sacsayhuaman (during the attack Juan was killed by a slingstone). The following day was decisive. The Spanish scaled the walls in the evening and after two more days of fighting there were no Inca alive in Sacsayhuaman. The Spanish razed the buildings, but foundations remain of Muyucmarca, a round tower, and Sayacmarca, a rectangular one. Nothing remains of the third tower, Paucarmarca, but it is the triple wall that captures the imagination and the fateful struggle between the Inca and Spanish.

On the Road to Pisac

Two kilometers northeast of Sacsayhuaman is Qenco, an important huaca or shrine. The eroded limestone outcrop was modified by the Inca who carved steps into it, a "theater," and images of a puma and (possibly) a condor. The site's name means zigzag, possibly a reference to channels on top of the outcrop through which offerings of chicha might have flowed. Within fissures in the rock are large niches in which mummies of royalty might have been kept. Remains of a small posthouse for travelers, misnamed Puca Pucara or Red Fort, lie six kilometers beyond Qenco. More impressive is Tambomachay, meaning cavern lodge, more popularly known as Baño del Inca, a series of three waterfalls where a spring emerges from hillside few hundred meters up the road from Puca Pucara.