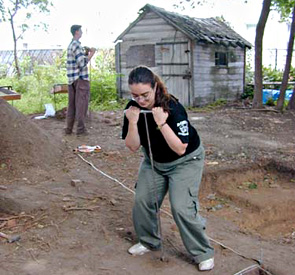 Shell Midden
Coring showed the extent of the shell midden. The roughly kidney-shaped feature seems to stretch one meter beyond our trench to the west and not too far under a tree just behind it. If we decide to put in another trench, the tree shouldn't get in our way.

The uppermost brick path seems to stop dead. We haven't yet found the privy or the well we hoped to find at its end, and old photos provide no clues. Based on brick size, shape, and wear patterns, we think the path dates to the late nineteenth or early twentieth century, but we'll have to wait for the expert to come down and check it out before we can be more definite.

The depression around the end of the paths we'd thought might reveal a privy or well seems rather to be an ash pit, a hole filled with ash from cooking fires, fireplaces, or coal-burning heating systems. Any of these uses is a possibility at the Lott site. The pit appears to cut through the latest path. Perhaps it is filling in a hole (maybe a privy) that the paths once led to. The pit is littered with condiment bottle sherds and thick whiteware ceramic sherds, from which we gather that the pit dates to the late nineteenth or early twentieth century. Some of the condiment bottles are traceable to a local Brooklyn store. Excavation has already shown the pit to extend approximately one meter below ground level, and it continues down. We're still digging.

The second circular depression (the one we found bits of concrete in) remains a mystery as we continue to dig.

Working along the foundation would allow us to document the types of materials and construction techniques used in building the Lott House. But after digging down over two meters (in the thick red-clay dirt characteristic of Brooklyn's sterile soil layer deposited, in part, during the last Ice Age approximately 12,000 years ago) we reached the bottom of the foundation and found NOTHING! No artifacts or major change in the stratigraphy, just red clay and sand. Until we open more trenches along the foundation, we have to assume that this house was built from the inside out so that the builders trench would be located along the foundation walls of the basement. If only we could dig in the basement of the Lott House! Alas, asbestos prevents us.

Not all the good stuff is in the scarps. Screening captures a jumble of artifacts and rocks.
(Courtesy Brooklyn College)

There is an old saying in archaeology that all the best stuff is located in the scarps (the walls of the trench), or under the back-dirt pile (no one really wants to dig that monster out), or extends outside the property line (as it did with the stone kitchen in 1998). Well, guess what, it appears that there is a wood feature located about one meter in from the northern boundary of the property! We're finding flakey pieces of wood in dark soil. We're only able to excavate this small portion of the unknown structure and therefore cannot get a good read on what it may be. We'll continue to excavate around this area next month in the hope that further exposure along the property line will help in our determination.

Concrete path and maybe a well?

An unexpected concrete path seems to lead to the house.
(Courtesy Brooklyn College)

We've been working towards the eastern portion of the property (still in the north field) trying to locate a well. As of now we've uncovered a strange pathway (trench N41.5 E23) that looks like concrete and seems to run directly into the lean-to section of the house, which dates to sometime after the construction of the 1800 house. Concrete around here most likely dates to after 1940. Until we can expose this feature we won't know for sure exactly where it goes, but it clearly is not a wellhead. However, just a bit to the west in an earlier stratum several stones have appeared. We're crossing our fingers--could this be the well?

As the first field session comes to a close, students repair to the lab to study their finds.
(Courtesy Brooklyn College)

Further exploration of this will have to wait until July; the first session of our field season has just about come to an end. We'll spend the next two days in the lab, washing artifacts and analyzing what we've uncovered till now. Digging is set to resume on July 7th with a new group of students and volunteers.

Oh yeah, another common saying in archaeology is that all the best stuff is usually found on the very last day of a scheduled field season. We can attest from the years of working in New York City that this is the truth!

What clues should we look for to determine where the paths once led?

Did people use different materials to fill in different kinds of holes--ash for a privy, perhaps, or shell for a natural dip in the land?

What would building a house from the inside out involve?

What would you do if you discovered that an important feature encroached on the neighbor's property?

As excavation continues, how will we know whether this is a well or just a hodge-podge of rocks?

Should we excavate another trench or do we have enough of a sample to understand the midden?

What research questions should guide the week of lab work?