A review of the video games that inspired the new movie 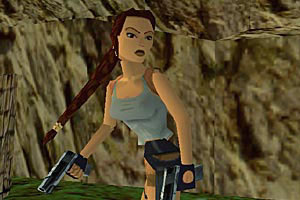 The digital Lara Croft from one of the earlier games

If the film version of Tomb Raider was the first you heard of Ms. Croft, you've definitely been missing something. Knowing that the new movie would send many of you on a quest for more Lara, ARCHAEOLOGY decided to give you a run-down of the video games that inspired the film.

The first Tomb Raider hit shelves in 1996, revealing the well-endowed Lara to teenaged boys everywhere. But the pistol-packing tough girl, who retains her feminine touch, was also a hit with the female population. There are now five versions of Tomb Raider, not counting some extras like Lost Artifact (originally just for PC, but coming available on Mac as part of Trilogy, a pack of the first three games) and a version for Game Boy Color.

Each of the games has a vaguely archaeological theme, though the methods aren't exactly anything that would be approved by a real archaeologist. No long days digging with a trowel for this girl; rather, Lara Croft breaks her way into tombs--maybe killing an endangered animal on the way--to get to the goodies inside. Her adventures can be compared to those of Indiana Jones, though at least he was, in theory, sponsored by a university.

In the original Tomb Raider, Lara is hired by a technology company to locate pieces of an ancient artifact, the Atlantian Scion, from various places around the world--Peru, Egypt, Rome, and finally the fabled Atlantis. In Tomb Raider II, Lara is in search of a Chinese antiquity spoken of in legend (in video-game land at least), the Dagger of Xian. The Mafia turns out to want it too, but some Buddhist monks show up to help (unless you accidentally have Lara shoot them). This second version takes you to Venice, Italy, Tibet, and China. It is more of a bang, bang, shoot 'em up game than the first, which had more puzzles.

Tomb Raider III: The Adventures of Lara Croft has our gal all over the world--the Arctic Circle, the South Pacific, India, Area 51, and London--looking for artifacts once in the possession of a sailor who ended up in the Arctic ice. Version three brings back more of the problem-solving aspects of the game, toning down the combat somewhat.

Egypt is the setting for Tomb Raider: The Last Revelation. You get to learn about the heroine's background for the first time as you play the 16-year-old Lara in the training level, which is set in Cambodia's Angkor Wat. Then it is back to the buxom brunette as you know her, as she gets into trouble by taking an ankh from a temple and setting free the Egyptian god Set. At least in this version of the game, Lara's objective is saving the world from the wrath of the death god. Maybe tomb raiding has finally caught up to her? The game takes you through Cairo, Karnak, Giza, the Valley of the Kings, and Alexandria. Gamers seem to think this version is the best, one of the most challenging with nice graphic improvements.

The latest Tomb Raider, Chronicles, is out for PC, Dreamcast, and Play Station, and soon-to-be released on the Mac platform. At the beginning of this game, Lara Croft is presumed dead in Egypt and some friends get together to talk about her past adventures, which make up the play in Chronicles. Lara of Games Past searches for artifacts in Roman ruins, a Russian submarine, an Irish moor, and a high-tech city.

The games are good fun, all-in-all, though I'd say rather difficult. (Let's not talk about my getting stuck in the training level of The Last Revelation.) If you can get past the actual tomb raiding bit, you archaeology lovers are sure to enjoy running around as Lara Croft.

For the Tomb Raiders for Play Station or PC, see www.eidosinteractive.com. For the Mac version of the games, see www.aspyr.com.

For all the Tomb Raider fun, don't miss www.tombraider.com.

Amélie A. Walker is webmaster of ARCHAEOLOGY.