Mysterious Pit
In N32.5 W7, near the west field shell midden we found a large pit packed with a fill of early twentieth-century garbage. The pit reaches a depth of about two meters. Generally, large pits are not dug so close as this one to the house and front yard. Ever hopeful of finding a well, we crossed our fingers once again. Alas, we hit the water table at the two meter mark.

The Sand Pit
Our pit, which slopes away from the house, has revealed a large cast-iron pipe. The pipe may be either a cesspit feeder pipe (channeling water or waste) or a link to the city's sewer system. Strangely, no one is quite sure whether the house is connected to the city's sewage system. The city cannot find the relevant records. The pipe seems to lead beneath the present-day garage, and we'd wager there is a cesspit under there. The sand pit is surrounded by the same mica schist rock used for the foundation of the stone kitchen (unearthed in 1998). Family lore has it there was a bathroom in the house long before city water entered the house in 1927, suggesting there was indeed once a cesspit. Strangely, we recovered no artifacts from around this pipe. Fill usually contains some cultural material. 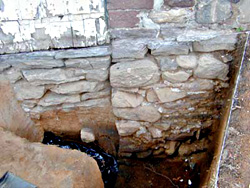 
In the area of the three paths, approximately two meters below surface, we finally found the remains of a privy. It appears that the paths may have led to it, confirming our earliest hopes! Of course, following tradition (not to mention Murphy's Law), the privy remained hidden until the last day of the field school. We'll make time for further work on this feature in August, extending the trench a bit farther, but the privy seems to run along the property line, so the rest of the privy is in the backyard of the neighbor! What we've got is a wood-lined square box with a sandy bottom. A preliminary look at the artifacts coming out the privy places them in the mid-nineteenth century, but we'll see whether closer analysis in the lab bears out those early conclusions. One student was so happy about the find and the quantity of materials emerging from it that she broke down in tears of joy. It made for a great picture! One of the most spectacular finds in the privy was a salt-glazed stoneware smoking pipe in perfect condition! We've also noted lots of chamber pots, cut glass, drinking glasses, and buttons. Click here to read student accounts of the privy's discovery.

What might have been the use for this mysterious pit?

Why would people have thrown chamber pots into a privy?

The official field school is out for the summer, but we will press on. Next week, we'll return to the lab for a closer look at these exciting discoveries. We'll be back in the field in August with a handful of volunteers (four or five, not the 20 we've been lucky enough to have these past two months.) Check here in two weeks for the latest update.