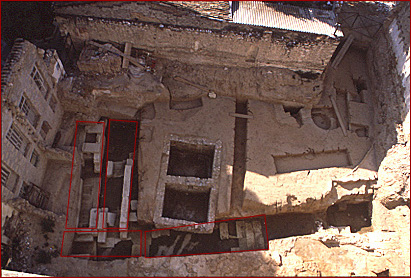 Evidence that might help pinpoint the identity of the dead will come not just from the bones, but also from the artifacts found with the bones, the Athenian historian Thucydides' description of the war, and our knowledge of the state burial ground from Pausanias' description of it along with archaeological finds related to it.

According to the site's excavator, Charis Stoupa, the quality of the contruction, layout, and location of the tombs all point to their being a state burial. The pottery from the polyandreia includes red-figure vases and white-ground lekythoi (oil vessels) with battle and funerary scenes. The pottery, she says, dates the complex to between 430 and 420 B.C. Stoupa notes that the pottery from the polyandreia is unburnt, though the bodies were cremated. This might reflect, she says, the Athenian custom of cremating soldiers killed abroad and bringing their ashes home for burial.

Thucydides is our chief source for this period. A young man at the outset of the war, he survived the plague and eventually was made a general and served in the northern Aegean. In 424 he was exiled for not getting his ships to Amphipolis in time to save it from the besieging Spartans. He returned to Athens at the end of the war and died soon afterward. Thucydides' account of the war provides details of battles on land and sea, often giving information about the numbers of soldiers involved, whether infantry or cavalry, their leaders, and casualties.

Thucydides recorded, for example, the following battles in the first year of the war: an unsuccessful Spartan attack on Oenoe, a fortified border post; defeat of an Athenian cavalry detachment at Rheiti, near Eleusis; a minor cavalry engagement at Phrygia between the Athenians, with Thessalian support, and Boeotians; fighting by the Athenian fleet at Methone, Pheia, Thronium, Alope, Sollium, and Astacus; actions against the Chalcidians and Potidaeans in the north; and an expedition Pericles led against Megara. Thucydides describes the following years of the war in similar detail, giving a battle by battle account. It might just be possible to match the Dêmosion Sêma remains with casualties from one or more of the battles of which he writes.

Pausanias noted monuments in the Dêmosion Sêma to Thessalian cavalrymen who died fighting with their Athenian allies (431); Athenian cavalrymen who perished with the Thessalians (431); Melasandros, killed fighting in Lycia (430); and Athenians killed fighting at Tanagra (424) and Amphipolis (422). It might be tempting to try to match the remains excavated in 1997 with one or more of these monuments, but there is good reason to be cautious. Soon after the Peloponnesian War the Academy Road was rebuilt in the form of a 121-foot-wide ceremonial avenue. After the Greek defeat by the Macedonians at Chaironea in 338, when Athens expected attack, grave monuments were used to reinforce the city walls. Furthermore, Hellenistic graves were later built among the state monuments. Finally, the area was doubtless altered more when first Philip V of Macedon, in 200 B.C., and then the Roman general Sulla, in 86 B.C., attacked Athens at the western (Dipylon) gate. Thus the Dêmosion Sêma of Pericles' day had been considerably transformed by the time Pausanias saw it in the first century A.D.

We have some additional knowledge of Dêmosion Sêma monuments from excavations and chance finds. Early state tombs dating to 479 B.C., the time the city wall was built, have been found flanking the gate and oriented parallel to the wall rather than the Academy Road. For whom the tombs were built is unknown, but by the end of the Peloponnesian War they were covered over. A nearby polyandreion on the south side of the Academy Road has been excavated. An inscription on a cornice block identifies it as the burial place of members of the Spartan garrison killed in 403 B.C. After their victory, the Spartans helped to establish an oligarchical government in Athens. The so-called "Thirty Tyrants" ruled for several months in early 403, until democratic forces were strong enough to mount a series of attacks that led to full-scale civil war. Spartan troops fought on the oligarchical side, but the opposition won and democracy was restored. The tomb, a 34-foot-long ashlar masonry structure divided into three chambers, held the remains of 13 men. Iron lance and arrowheads were found with the bones. Just west of the Spartans' tomb were other burials of warriors, unidentified and undated, that shared a common facade on the Academy Road.

Also on the south side of the Academy Road is an elaborate mid-fourth-century tomb, a 49-foot-long rectangular enclosure, built of ashlar masonry and with guardian dog sculptures on the corners, around a circular structure that was topped of by a six-foot-high marble vase. It has been called the tomb of Chabrias, an Athenian general who died in 357 B.C., but only because Pausanias mentions that Chabrias' tomb was along the Academy Road. The date is appropriate, but there is no proof of the identification.

What Pausanias does, or does not mention, when checked against archaeological evidence underscores the need for caution in using his information in identifying the polyandreia. Fragments of the monuments to those killed at Corinth and Koroneia in 394/93 B.C. and an inscription relating to the dead in fighting at the Hellespont have been found, and both are noted by Pausanias. On the other hand, an inscription for Athenians killed at Potidaea (perhaps in 432 or during the siege of 430/29) has been found, but Pausanias lists no such monument. He does not mention the early state graves flanking the gate or the polyandreion of the Spartans from 403 B.C., nor does he mention a monument for those killed at Samos in 440/39, though we know from the biographer Plutarch (ca. A.D. 50­120) that Pericles gave their funeral oration (epitaphios logos). But Pausanias should not be discounted. In his 1983 monograph on the Dêmosion Sêma, Clairmont found that although inscriptions (lists of casualties or commemorative epigrams) and other ancient authors provide evidence of as many as 45 monuments that Pausanias did not record, he is our only source for 12 memorials from the cemetery.

Physical characteristics of the bones, reflective of class (health and nutrition) or habitual activities and training (riding and dismounting, carrying spear and shield, or rowing), may permit identification of the class of citizen and type of soldier present in the tombs. Perhaps a link can be established between this data and the Thucydides' accounts of specific battles. We have the following evidence for polyandreia from this time period (Clairmont [1983], pp. 174-1890): an epigram for casualties at Potidaea in 432 B.C., Pausanias' mention of the graves of Thessalian and Athenian cavalry from 431, a casualty list fragment possibly from 435 or 431, a casualty list fragment possibly from 429, Pausanias' mention of the monument to Melesandros and his men of 429, two different casualty list fragments uncertainly dated from 428 to 422, Pausanias' mention of the grave for those killed at Tanagra in 424, a stele with casualty list from 424 and 423, Pausanias' reference to a memorial for dead from fighting at Amphipolis in 422 as well as a fragment of a casualty list that might be part of the memorial, and Pausanias' mention of a monument for those killed at Mantinea in 418. Much will depend upon how closely Charis Stoupa is able to date the pottery from the tombs. The date of the pottery could reinforce a proposed link to Thucydides or narrow down which, if any, of the ancient monuments we know of might correspond to the Salaminos Street polyandreia. When all aspects of the investigation have been completed and the various threads of evidence interwoven, we may be able to say who the remains represent.