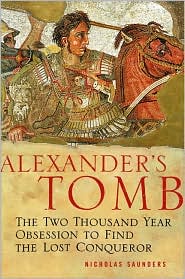 Alexander's tomb is an object of archaeological obsession, not for the treasures it might contain--they were almost certainly looted long ago--but for the body of Alexander. While living, Alexander was a demi-god; after his death, his divinity grew. Roman emperors visited his tomb because they wanted to be associated with his greatness. He was revered even by early Christians--during the fourth century they wore medals with the name Jesus Christ on one side and the Macedonian conqueror on the other.

Alexander died in Babylon in 323 B.C. after a lingering illness, possibly malaria or West Nile virus. As his remains were being taken back to Macedonia, Alexander's trusted general, Ptolemy, hijacked the mummified body and brought it to Memphis in an attempt to legitimize his own new position as king of Egypt. Thus begins the incredible story of Nicholas J. Saunders's Alexander's Tomb (Basic Books, $26.00).

There is no shortage of potential sites for the lost tomb. The most notorious is, of course, the sarcophagus in the British Museum that Napoleon's savants believed was Alexander's. Later, when hieroglyphs were deciphered, it was revealed that the sarcophagus was carved for Nectanebo II, the last native ruler of Egypt. So it's not Alexander's. Or is it? Nectanebo fled Egypt and never used it, so it is possible that Ptolemy buried Alexander in the vacant royal sarcophagus. There was even a faint rumor that Nectanebo was Alexander's father.

Saunders skillfully tracks the possibilities from Alexander's first tomb at Memphis to the last two where he was reburied in Alexandria. Using maps and discussions of where the walls of Alexandria were and how they changed, he lays out the most likely possibilities.

One option Saunders has eliminated was a find announced by Liana Souvaltzi, a Greek archaeologist, who stunned the world in 1995 by announcing she had discovered a tomb bearing three limestone tablets inscribed with the tale of Alexander's poisoning and how Ptolemy had taken his body to the Siwa Oasis for burial. For a while people believed her, but eventually the translations proved to be fantasies. No one knows where the tomb is (my guess is he lies somewhere beneath the streets of modern Alexandria) but it's a great story and the search goes on.