Special effects fail to save this silly summer sequel 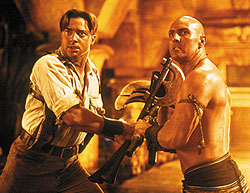 Universal Pictures' The Mummy Returns grossed $68.1 million in its first weekend and primed America's palates for two other archaeology-oriented summer blockbusters, Disney's Atlantis and Paramount's Tomb Raider. The exploits of mercenary-adventure Rich O'Connell (Brendan Fraser) and his bombshell Egyptologist wife Evelyn (Rachel Weisz) against a desiccated mummy bent upon world domination (Imhotep, played by Arnold Vosloo), draw from a rich cineo-archaeological legacy ranging from Boris Karloff's 1932 classic The Mummy, to 1981's Raiders of the Lost Ark. But to paraphrase Lloyd Bentson: Rick O'Connell, you are no Indiana Jones.

If you were expecting any archaeology, forget it. The main attraction of this film is its spellbinding special effects. But no amount of special effects can make up for the fact that the main characters in the film are utterly hollow. Summer adventure movies are usually not intended to be Oscar vehicles and whiz-bang effects generally make up for a weak story. The Mummy Returns, however, aims for an overly low level of audience sophistication. Weisz revealed in an interview that writers had to change her character's name from Nefertiti to Nefertiri to avoid potential boob jokes.