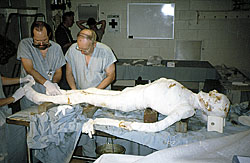 The mummy, still atop its embalming planks, is wrapped in white linen. (Pat Remler)

For 3,000 years the ancient Egyptians mummified their dead, but no embalmer ever wrote down how he did it. Egypt was a nation of accountants who recorded almost everything--battles, offerings to temples, long lines of kings--but not a single papyrus exists telling how a human cadaver was prepared for the journey to the afterlife. For centuries mummification remained a closely guarded secret, that is, until Herodotus, the Greek historian and traveler, visited Egypt around 450 B.C. Herodotus described mummification in great detail:

As much of the brain as possible is extracted through the nostrils with an iron hook, and what the hook cannot reach is dissolved with drugs. Next the flank is slit open with a sharp Ethiopian stone and the entire contents of the abdomen removed. The cavity is then thoroughly cleansed and washed out, first with palm wine and again with a solution of pounded spices. Then it is filled with pure crushed myrrh, cassia, and all other aromatic substances, except frankincense.
The incision is sewn up and then the body is placed in natron, covered for 70 days, never longer. When this period, which may not be longer, is over, the body is washed and then wrapped from head to feet in linen which has been cut into strips and smeared on the underside with gum, which is commonly used by the Egyptians as glue. In this condition the body is returned to the family....

Based on Herodotus' account and Egyptologists' research, the basics of mummification had been pieced together by the 1920s and scholars felt that little more was to be learned. In 1992, while writing a book on mummification, I began to realize just how wrong they were. There was a lot that we didn't know. Did the embalmers drain the blood? How do you remove a brain through the nose? What kind of tools did the embalmers use? How was natron used? What surgical procedures were performed? I realized that the only way to answer such questions was to actually mummify a human cadaver.

By mummifying a body donor at the University of Maryland's School of Medicine in Baltimore, we were able to answer many questions regarding how bodies were prepared for the afterlife.

Bob Brier is a professor of philosophy at the C.W. Post Campus of Long Island University, Brookville, New York. His most recent book, The Murder of Tutankhamun: A True Story, was published in 1999.

(c) 2023 Archaeology Magazine, a Publication of the Archaeological Institute of America